Learn more about this type of bond below, or contact our experienced surety agents for assistance with any questions you may have.

What Is A Bid Bond?

Imagine going to all of the trouble to advertise a construction project, solicit bids from contractors, evaluate those bids, and offer a contract to a qualified bidder, only to have that bidder say “Thanks, but no thanks.” That’s the situation that construction bid bonds are intended to prevent.

A great deal of effort and expense goes into the bid advertisement, solicitation, and evaluation process, and having to start all over again can be a sizeable expense. A bid bond is a type of construction surety bond that gives project owners some recourse and financial protection in such cases.

Why Are They Required?

The most common reason that a contractor may turn down a contract is realizing that the project can’t be done profitably for the bid amount. Sometimes a contractor only discovers that after submitting a bid. This may occur because a critical cost factor was inadvertently overlooked, a subcontractor revised an estimate upward, or materials can’t be procured for the price the bid was based on. Additionally, contractors will sometimes bid on multiple jobs even knowing that winning more than one could pose a capacity problem.

Whatever other requirements may be built into the terms, a construction bid bond is essentially a contractor’s guarantee to accept a contract if chosen as the winning bidder. With money on the line, contractors are less likely to bid frivolously, and project owners won’t lose out if they do.

It’s up to construction project owners to decide whether or not to require contractors to submit a bid bond along with their bids. These bonds are not a statewide requirement. However, state and local agencies sponsoring public works projects funded by taxpayer dollars do typically require contractors to post bid bonds in order to submit a bid. Many private project owners and general contractors do so as well. The larger the project, the more likely it is that this type of surety bond will be required.

Often, a project owner will require bidders to purchase a “suite” of construction surety bonds. This generally includes a bid bond, performance bond, and payment bond. Non-winning bidders can simply cancel the other bonds for a refund.

Both general contractors and specialty subcontractors (e.g., electricians, plumbers, and HVAC) may need to purchase this type of bond in order for their bids to be accepted for consideration.

How Do They Work? 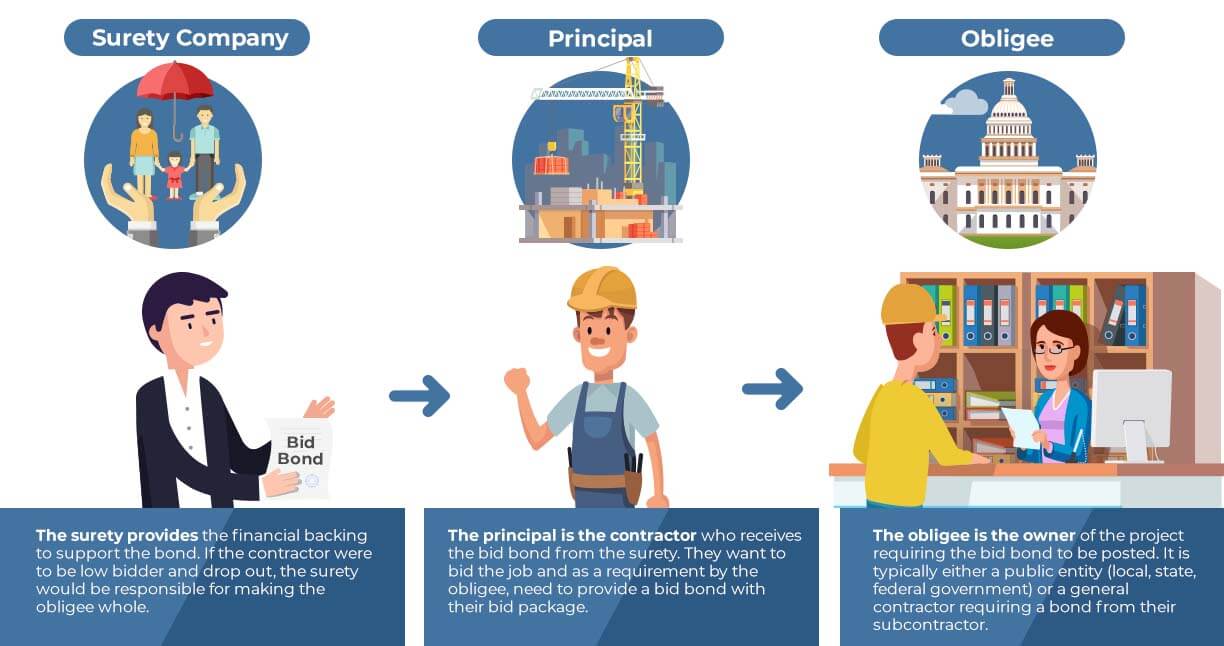 Each of these parties has specific rights and/or responsibilities under the terms of the bond. At a minimum:

What Happens When A Claim Is Filed?

If the winning bidder turns down the contract, the obligee will submit a claim against the bond to recover any financial loss that results from the contractor’s decision. For example, the obligee may have to make changes to the project plan due to the additional time and effort it takes to select a new contractor. A new RFP or bid solicitation may need to be developed and advertised. And time is money in such matters.

There may also be a ripple effect that magnifies the impact of the contractor’s decision. Imagine a commercial retail project in which rental agreements are signed for anchor stores months before ground is broken on construction. A project delay of even a couple of months can have significant financial repercussions. The full impact of the winning bidder backing out may not even be known for some time.

Once a claim has been filed against the bid bond, the surety will conduct an investigation to determine whether it is valid. The surety will pay any claim that it finds to be valid and will then seek repayment from the contractor, which may include interest and penalties as well as the damages paid to the obligee.

In addition to the financial cost of a claim against the bond, the contractor’s reputation can also suffer to the point that it becomes a handicap in obtaining future bid bonds. That would prohibit the contractor from competing for future contracts that require bid bonds and could spell financial ruin. The best way to avoid a claim is to bid responsibly on projects that you are prepared to complete.

How Much Does A Bid Bond Cost?

The project owner (obligee) determines the required amount of the bond. This is generally in the range of 5%-10% of the total contract amount. Bid bonds obtained in conjunction with a performance bond may not cost you anything.

While some surety companies charge a fee for bid bonds, we do not at Surety Bond Professionals. These bonds are usually given with the intention that a P&P bond will be issued (and charged) if you are low on the project.

For smaller contracts and companies, the contractor’s personal credit history is the primary underwriting consideration. For larger contracts, the project’s location and the contractor’s financial history and stability may also be scrutinized by the surety’s underwriters to determine the final cost.

Whether you need only a construction bid bond or a bid bond plus performance and payment bond, Surety Bond Professionals is here to help. We have over 30 years of experience providing construction surety nationwide. Simply fill out our online quote form to get started!

"As a growing WBE/MBE contractor, Surety Bond Professionals secured our first bond when other bonding agencies couldn't. The team puts their heart and soul in providing excellent service and they treat their clients like people, not numbers."

“Surety Bond Professionals make the bonding process easy and straightforward. They do it right the first time which saves us time and money and allows us to secure the size jobs we want. The team is accessible, flexible, and easy to work with. Ours is a relationship built on TRUST.”

"It was always stressful working with our previous surety. Because Surety Bond Professionals specialize in construction bonds, they have a comprehensive understanding of the market which provides us a high level of comfort. They are able to keep our bonding line open, so we're able to bid when we want to."

"It was our first time applying for a Payment & Performance Bond in the U.S. and we were talking with 4 different surety agencies. We chose Surety Bond Professionals because they made it so easy and got us a fantastic rate. With two Federal projects under our belt, we now have a solid foundation to bid and win larger government contracts."

“Working with Surety Bond Professionals has allowed me to bid on more jobs, and jobs 3 times the size of what we could bid previously. They’ve helped us significantly increase our revenue.”

“Surety Bond Professionals are simply phenomenal to work with. Not only do they provide excellent service, but they’ve been able to boost our bonding capacity to a level that wins us more jobs.”

“We needed a $2,000,000 bond, and after many unsuccessful attempts by other surety agencies, Surety Bond Professionals were able to get the job done. They get us what we need, and that’s been the key factor in the growth of our business.”